Hunter-gatherer Cave on a Chichibu Mountainside

On a recent outing to the ruins of the former Mitsumine Ropeway in Chichibu, Saitama we spotted what appeared to be a cave in the distance. Never to let a good opportunity pass we decided to make the short 20-minute hike to take a closer look. The Kaniwa cave sits on the side of a mountain across from the Otaki Village. According to the sign board the cave has been utilised since the Jomon period and later in the Edo period for hunting and as a place to stopover. The Jomon period dates from approximately 14,000 BCE. Archaeological surveys have discovered human and animal bones including bear, deer, tanuki (Japanese raccoon dog), rabbit and fish. In addition, earthenware and stone tools have also been excavated at the site. The overhanging rock ledge provided shelter from the elements and cool air emanating from the cave itself would have offered a source of natural refrigeration.

Access: take a 12 minute bus ride from Mitsumineguchi Station (10 daily buses) and get off at the Owa bus stop a 25 minute walk.
. Looking up to the Kaniwa Cave. Entrance to the cave on the right. 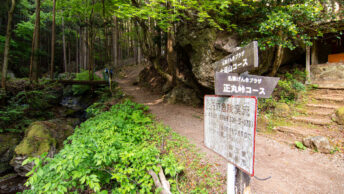 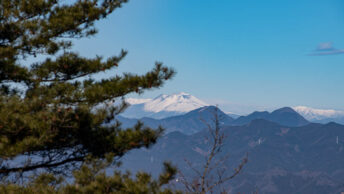