21 Years of Rock Versus Man and Chisel

South-east of the Turkish capital Ankara lies Cappadocia, a harsh landscape where its inhabitants for centuries eked a subterranean existence by tunnelling deep into the soft stone bluffs. On a comparatively smaller scale the semirural town of Yoshimi in Saitama Prefecture on the outskirts Tokyo possess similar soft sandstone tuffs and is sometimes referred to as the Cappadocia of Japan. In contrast to the cliffs in central Turkey, the hillsides of Yoshimi reveal a more sinister past including numerous WW2 era tunnels, along with a cluster of ancient graves. Enter the Yoshimi Gan Kutsu Hotel. In an attempt to emulate some of the hollowed out dwellings of Cappadocia, Takahashi Minekichi a local strawberry farmer, gave up his livelihood at the age of 46 to start chiselling out a dream dwelling of his own. Over a period of 21 years (1904-1925) Minekichi plied his new trade, carving out a grand entranceway, some staircases, a kitchen and several rooms including one upstairs balcony complete with ornate railings. The intent was to create not so much a hotel in the traditional sense but more of a 1920s Art Deco style home. Notably he worked alone until his death at the age of 67, utilizing for the most part only a rock chisel to fashion the vast interiors. While the residence was never fully realized, posthumously the façade was rendered over in white brick until it to finally acceded to the elements. From a haikyo / ruins perspective the abandoned structure remains more or less impenetrable through several years back a few buddying explorers managed to breach the fortress (one of the smaller entrances had been covered with a wooden pallet). The site also rests next to a busy road and while the outer perimeter fence looks easy enough to slip over, the three entrances are now shielded with portcullis walls. Internally the hotel has succumbed over the years to cave-ins which is probably another reason its best to appreciate this ruin from a distant. 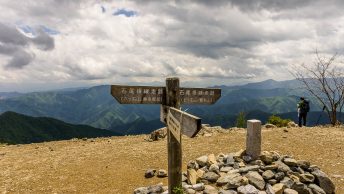